Short animation movie, based on Nathan’s Jurevicius award winning graphic novel. For generations the Face Changers have made the clay tokens that alter the winds and faces of their kin. This month the youngest is tasked to take the ten thousand footsteps to the top of the east mountain and engulf the town in the winds of change. Innovative, colorful animation invites to travel into magical world. 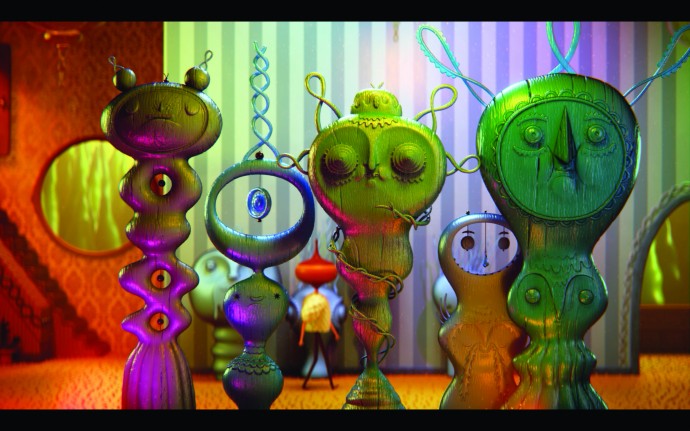 Nathan Jurevicius has worked as a freelance illustrator and artist for many international companies and publications. His most acclaimed project to date is Scarygirl; the cute but slightly odd little girl who was abandoned late one night and is later found and brought up by a friendly octopus and guided by a mystic rabbit (Bunniguru). The world of Scarygirl is a vision that is filled with psychedelic colours, dream-like compositions and heartfelt stories that recall fables and folklore from our shared cultural memory. The brand since its creation in 2001 has developed an underground following of fans throughout the globe through its online comic, numerous limited edition vinyl toys, designer products and traveling shows.

In 2004 Oscar-winning producer Sophie Byrne of Passion Pictures (best known for its Gorillaz music clips) optioned Scarygirl. The property is now in active script and visual development for an animated feature film. Jurevicius has also completed his first graphic novel based on Scarygirl released by Australia’s leading Independent publisher, Allen and Unwin, distributed in North America by Last Gasp and ARX in Brazil. The graphic novel has since garnered various accolades including winning the 2009 Aurealis Award for Best Illustrated Book/Graphic Novel, the 2010 CBCA Notable picture book list and included in International Youth Library’s The White Ravens 2010, an annual selection of outstanding books for children and young adults.