On 21st of July 2015 from the centre of Vilnius a monument of Socialist period has been removed with no apparent reason. The object was standing on a bridge as city landmark since 1952. Eight figures have survived the 1990-91 wave of dismantlement of public sculptures of the Socialist period and were enlisted as a protected heritage object. And the only explanation why the monument was removed is to create a broadcasted event, similar to those successfully circulated a quarter of century ago. For several days the artist and a few people film team were following preparations and the actual taking down. The action of calibrating the cameras becomes a ritual for the object about to leave. The filming process and participation in it is both mediating and legitimising the procedure, even if against artists’ will. Sound and text narratives are associated with the disappearing monument and the removal of bronze bodies is edited into stereoscopic video performance. 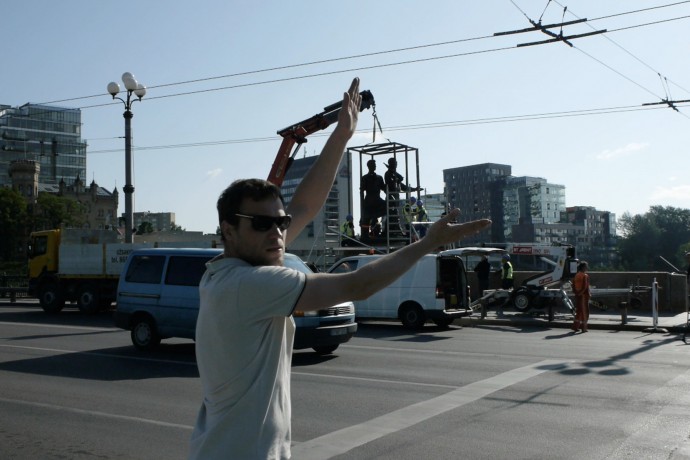 Deimantas Narkevičius was born in 1964 in Utena, Lithuania and lives and works in Vilnius. He graduated from the Art Academy in Vilnius as a sculptor and spent a year in London in 1992/93. On his return to Lithuania he was concerned with site-specific objects but a strong interest in narrative led him to record interviews and conversations with artists. This process evolved into an exploration of different narrative structures through film and video, the work for which Narkevičius is now best known.

Narkevičius is one of the most consistent and widely recognised Lithuanian artists on the international art scene. He represented his country at the 49th Venice Biennale in 2001 and exhibits at the 50th Venice Biennale in 2003 in ‘Utopia Station’ curated by Molly Nesbit and Hans Ulrich Obrist.
Since 1992 he has exhibited extensively around the world in group shows at many significant contemporary art venues and events. He showed at Manifesta II in Luxembourg in 1998 and has exhibited in London, Paris, Brussels, Vilnius, Manchester, Dublin, Vienna, Helsinki, Stockholm, Zurich, Rotterdam, Melbourne and many other cities. Solo shows include ‘Either true or fictitious’, at FRAC Pays de la Loire in France in 2003 and ‘Deimantas Narkevicius Project’ at the Munchner Kunstverein, Munich in 2002.